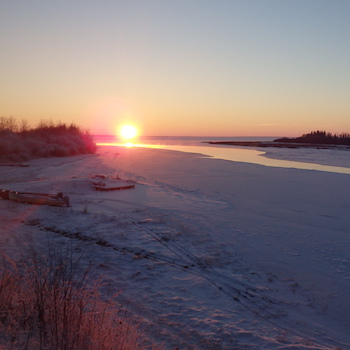 Wilfrid Laurier University researchers have worked for decades in Canada’s North, with a particular focus on the Northwest Territories (NWT). Ranging from scientists examining the hydrological and ecological impacts of permafrost thaw to researchers focusing on food sustainability, the critical mass of northern-focused research at Laurier has influenced development of evidence-based environmental policy that has translated into practical applications to support ecological integrity and human health.

Laurier’s northern research consists of monitoring, modelling, predicting and making policy recommendations in a variety of areas including the following:

A central pillar of Laurier’ northern research initiatives, the longstanding Government of the Northwest Territories (GWNT)-Laurier Partnership is an expanding collaboration between Laurier researchers, the GNWT and a variety of other partners. Formally established in 2010, the 10-year partnership serves to provide new infrastructure and expertise to the GNWT for environmental research and education. The partnership expands the Territories’ capacity to conduct a range of research, inform policy development and to train the next generation of highly qualified personnel needed to manage the territory in the face of emerging challenges.

Laurier is involved in a number of other partnerships and collaborative initiatives in the North. These include being one of four partner universities in the University of Saskatchewan-led Global Water Futures (GWF), one of the largest water science collaborations in the world. The Laurier-led Northern Water Futures (NWF), a project of GWF, is a Northwest Territories-focused consortium working collaboratively to understand, predict and address the impacts of climate change and industrial expansion on shared water resources across the NWT.

Laurier researchers make use of a large range of research sites across northern Canada, primarily in the NWT. In 2015, Laurier’s Changing Arctic Network (CANet) research team was awarded $3.2 million in funding from the Canada Foundation for Innovation (CFI) to enhance its world-class research infrastructure throughout the NWT. In addition to research stations, the infrastructure funding will support 20 “living laboratories,” each representing a widely occurring biophysical environment, plus updates to three environment and natural resources laboratories in the Northwest Territories. For a full list of areas where Laurier researchers work, see Research Sites.

It is a high priority for Laurier to ensure communities have a voice in and benefit from the work the university does. Before the university begins projects in any northern community or First Nation, Laurier’s researchers take care to meet with locals and governments to ensure projects are of mutual benefit and are conducted in an environmentally responsible and culturally appropriate manner. Community engagement efforts include field courses for high school students, work with local schools, participation in on-the-land camps to bring together science and traditional knowledge, and public talks to bring Laurier researchers’ knowledge to a wider audience.

Wilfrid Laurier University is a leading Canadian university known for academic excellence and a culture that inspires lives of leadership and purpose. With more than 19,000 undergraduate and graduate students, Laurier has a distinct commitment to teaching, research and scholarship combined with a strong student focus, high levels of student satisfaction and a deep sense of community. Laurier’s research strengths address current issues of societal importance, including the environment; governance and policy; health and well-being; culture and society; and economics, markets and management. Laurier has established a reputation for community involvement and engagement. The university’s researchers collaborate with other institutions nationally and internationally as well as with industry, government and community partners. Laurier’s innovation and research-focused faculty are key factors that attract students to Laurier to pursue their research interests.