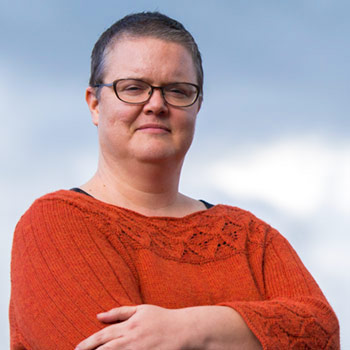 Laurier expert on paganism gives a primer on witches

Laurier expert on paganism gives a primer on witches

What comes to mind when you think about witches? A pointy hat, broomstick and bubbling cauldron? Green skin, a warty nose and cackling?

There are real people today who proudly call themselves witches but – though they might dress up in pointy hats at Halloween for the fun of it – are more likely to wield a protest sign than a broomstick and stir the pot of controversy rather than witches’ brew.

Chris Klassen, an award-winning instructor in Wilfrid Laurier University’s Religion and Culture program, has extensively researched feminist witchcraft, Wicca and other forms of contemporary paganism. She says feminist witches – the group most likely to use the term “witch” – are as political as they are spiritual.

A Brief History of Witches

Before Christianity came to Europe, most people worshipped a culturally variable pantheon of deities, including goddesses, which generally underpinned a reverence for nature. Echoes of pre-Christian paganism can still be found today, such as in the eggs and bunnies symbolizing fertility that are prevalent at Easter, a holiday named after the Germanic goddess called Ēostre or Ostara.

“That power was associated with evil and Satan during the witch hunt periods in the battle to create an orthodox Christianity in Europe, which was also a battle between the rising male medical profession and female herbal practices.”

Contemporary Euro-American paganism, or neopaganism, arose in the early 20th century. Wicca, which comes from the Old English word for “witch,” was developed in England as a neopagan, nature-based religion in the 1940s and ‘50s and spread to North America in the 1960s and ‘70s, says Klassen.

Wiccans worship both a female goddess and male god and emphasize the duality symbolized by binary gender, says Klassen. Becoming a Wiccan is usually a secretive process whereby adherents, who must generally first undergo an initiation process, learn teachings within their community in a progressive manner. There is a hierarchy with a high priestess or priest at the top.

Wicca is strongly based on the reinvention of ancient European traditions and is primarily practiced by people of European descent, though there are groups that incorporate elements of other cultural traditions, such as Haitian Vodou, and though Klassen knows of at least one group of Japanese Wiccans.

Feminist witchcraft draws both from Wicca and from feminist thought. Like with Wicca, there is a strong emphasis on the feminine divine. However, it rejects hierarchy in favour of consensus and emphasizes openness and diversity rather than secret teachings, says Klassen, who wrote her PhD dissertation on feminist witchcraft.

Some of the differences are inherent in the name. While the term “Wicca” creates a degree of distance from “witch,” “feminist witches use the term ‘witch’ deliberately because they see the witch hunts of Europe in the Middle Ages as being a deliberate persecution of women, particularly women who had power,” says Klassen.

In the early days of the movement, feminist witchcraft, like Wicca, focused on the polarity of the feminine and the masculine, says Klassen.

“You don’t tend to see that same language today. Feminist witchcraft has been often associated with disrupting gender. One of the big groups, called Reclaiming, has become a very open place for multiple genders, transgender people and people who are questioning or queer, though other forms of feminist witchcraft are more goddess-centred.”

“Feminist witches have been very involved in the anti-globalisation, anti-militarism and anti-nuclear-weapons movements,” says Klassen. “They’re very much involved in fighting various oppressions – racism, sexism, homophobia. Some of the pagans are as well but it doesn’t define their paganism.”

Not all people who consider themselves witches are necessarily affiliated with either feminist witchcraft or Wicca. However, in Klassen’s experience, contemporary witches tend not to be offended by stereotypical Halloween-y depictions of witches.

“I’ve been to Halloween events with a lot of Wiccans and feminist witches dressed up as witches,” she says. “They have a sense of humour about it too.”

Halloween has roots both in pagan and Christian traditions. The name comes from All Hallows’ Eve, the day before the Christian All Saints’ Day, which is in turn before All Souls’ Day, days that respectively commemorate the saints and souls who have departed.

Halloween is also at the same time as and derives some of its practices from Samhain, a Celtic festival marking the end of harvest and the time when it is believed that the curtain separating the living from the dead is at its thinnest, says Klassen.

Carving faces into gourds and wearing frightening masks are ancient traditions that are meant to frighten away evil spirits, says Klassen.

“You’re trying to keep your safe space so you can interact with good spirits. For pagans, Samhain is still a sacred day when you can get insight from the next world.”

What about bingeing on candy and dressing up as superheroes and princesses?

“That has nothing to do with Halloween,” says Klassen with a laugh. “North America loves its capitalism.”

It may, however, be healthy for people to have fun with stereotypically frightening figures, including witches, to help us work through our fears, says Klassen.

“I wouldn’t say, ‘Don’t let kids dress up as witches for Halloween.’ We dress up as vampires, ghosts, and all sorts of figures. It’s in fun. I don’t think dressing up as a witch is an inappropriate use of somebody’s religion because I don’t think our popular cultural understanding of a witch has anything to do with feminist witchcraft, Wicca or any of those religious traditions.”