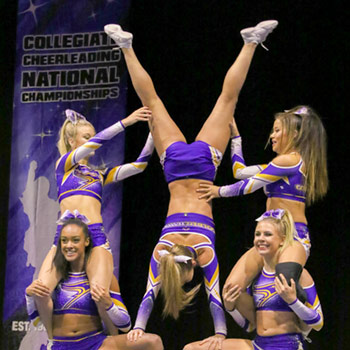 Eight national titles, a roster of skilled athletes and a rigorous nine-month season: these facts and figures accurately describe one of Wilfrid Laurier University’s sports teams.

Brianne Hanson, a fourth-year Laurier Arts student, bets that most people wouldn't guess cheerleading, a team she’s been part of since her arrival at Laurier’s Waterloo campus in 2013. More recognition for cheerleading’s legitimacy as a sport is something Hanson would like to see increase.

“Cheerleading is a sport, not just a sporting accompaniment,” says Hanson, who captained the 2016/17 team. “There’s so much more to what we do than what the sideline affords.”

Competitive cheerleading requires a variety of acrobatic stunts, pyramids, tosses, jumps and tumbling elements in each routine. Squad members positioned as bases and thirds lift, toss and catch the flyers – the teammates who execute jumps, twists and flips. Upwards of 26 cheerleaders are in motion at once during the high-impact, tightly choreographed routine.

Physical strength and agility aside, Hanson attributes much of the team’s success to their high levels of trust and communication.

“We hold each other up mentally and physically,” says Hanson. “If someone is having a bad day, we talk about it and get them back in the right head space to perform.”

Laurier’s cheerleading team fundraises throughout the academic year to pay for off-site training, as the athletic complex at the Waterloo campus doesn’t have the spring-loaded floor required to train safely. Off-site training also removes the team from campus, providing less opportunity for the Laurier community to see the award-winning team in action.

Hanson and some teammates advocate for Laurier’s cheerleading program through their participation with the Lettermen program, a volunteer opportunity for university athletes to provide mentorship and leadership to youth in the community through sport.

Hanson and 10 other Laurier cheerleaders graduate this spring. The team will look to Megan Clarke, Emma Heaps and Jordyn Witmeyer – three of Team Canada’s cheerleading squad who captured the bronze medal at the 2017 cheerleading world championships – to guide incoming talent at Laurier. Tryouts for Laurier’s 2017/18 cheerleading team are scheduled for Sunday, May 7 from 2 – 5 p.m. at the Cheer Sport Sharks facility in Cambridge, Ontario.