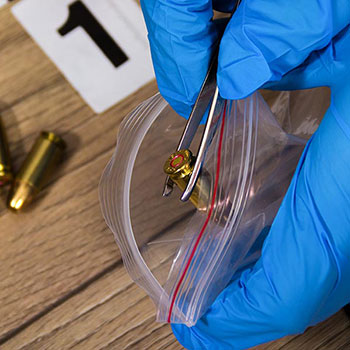 Forensics and physics go hand in hand. But it was not until last summer that the Royal Canadian Mounted Police (RCMP) formally married the two.

“They’ve accepted students from forensic science programs, but accepting a hard-science student is not something they’ve done in the past — they were happy to take me and I was happy to be the first physics student in the role,” says Galloway-Booth.

Galloway-Booth made the decision to contact the RCMP when exploring career options after graduation. With an interest in forensics, Galloway-Booth was also considering topics for his final major research assignment.

“I thought I’d get first-hand experience to see if this is work I’d like to be doing after graduating ... But after the five weeks and having the opportunity to see what everyone else was working on, I fell in love with it. It was great to use physics this way.”

“For my project, I wanted to do something career-related,” he says. “I see forensics work as a perfect combination of physics and real-world problem solving.”

Galloway-Booth worked under the supervision of Ioannis Haranas, adjunct professor of physics in Laurier’s Department of Physics and Computer Science.

“I remember Jordan coming into my office asking for me to supervise his project,” says Haranas.

“When he approached me, I found his idea very interesting and useful,” he says. “The important thing of all this work, as Jordan puts it, is the solid scientific base that was created.”

The RCMP’s FS&IS is an essential part of the organization and how criminal investigations are conducted. The unit provides several programs and services to clients in Canada and abroad. Those services include forensic science services, crime scene forensic identification, fingerprint identification, criminal record repositories and the National DNA Data Bank.

Galloway-Booth worked within the Firearms and Toolmark Identification Section, where he conducted firearm analysis lab work and contributed to the section's procedure.

Every gun barrel has specific rifling patterns that leave an impression on fired bullets. When crime-scene investigators are doing casework, for example, they can rely on microscopic measurements from recovered bullets to find patterns. From there, they can use a database to identify a list of potential weapons that were used.

“The problem is that there are so many different types of ammunition — weights, material, design can all vary,” says Galloway-Booth. “Examiners might not have a good understanding of how much those rifling-pattern measurements can change based on those variables, so they use a subjective uncertainty value on their measurements.”

Galloway-Booth was tasked with getting examiners on the same page by making sure there was reliable data to use and support the soundness of uncertainty values.

He conducted research on how rifling impressions would change using four common calibre firearms — two rifles and two handguns. For each weapon, he shot 10 different types of ammunition — used to reflect different weights, material and designs — 20 times, damaging some to simulate the condition of crime-scene bullets.

“With each bullet having 12 different markings, I did over 10,000 measurements this summer,” says Galloway-Booth. “I went cross-eyed a couple of times!”

His work led to a large dataset of measurements for damaged and undamaged bullets. He then analyzed the data for trends — to identify the biggest points of variation — and concluded with recommendations on how examiners could use thresholds for their own crime-scene casework.

“If the numbers are standardized, examiners providing testimony in court will have a solid base of research for their evidence,” says Galloway-Booth. “Using our samples, we want to make sure examiners are finding the right firearms but also not yielding a massive list of potential firearms. We found a way to be more accurate and specific when using the FBI’s General Rifling Characteristics Database.”

Upon reflection, Galloway-Booth knew the RCMP opportunity was a win-win.

“I thought I’d get first-hand experience to see if this is work I’d like to be doing after graduating,” he says. “But after the five weeks and having the opportunity to see what everyone else was working on, I fell in love with it. It was great to use physics this way.”

Galloway-Booth will be graduating from Laurier this year — and will be submitting his major research paper based on his work at the RCMP for publication in an academic journal.