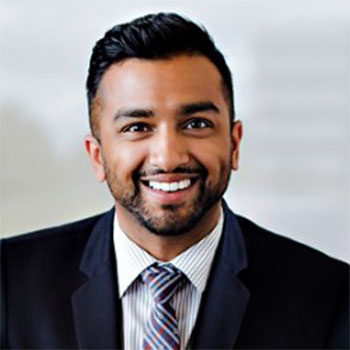 Sheldon Pereira, director of University Relations at Wilfrid Laurier University, is one of two local voices that will take part in the Canada 150 Community Leaders Network.

The leaders form a nation-wide network that will help communities throughout Canada stay informed about Canada 150 events — while bringing local voices and perspectives to Canada Day celebrations throughout 2017 and beyond.

“Kelly and Sheldon are recognized as community builders who bring energy, creativity and enthusiasm to everything they do. I know they will both do an outstanding job representing the City of Waterloo,” said Jaworsky in a City of Waterloo news release.

Pereira, who graduated from Laurier and was project coordinator for the Congress of the Humanities and Social Sciences when Laurier hosted it in 2012, became Laurier’s director of University Community Relations in 2015. In his role, he builds partnerships and enhances Laurier’s relationships with stakeholders at all levels of municipal government and with key community leaders. He is also responsible for institutional ceremonies and events, and managing Laurier’s Toronto office.

Serving as a Canada 150 community leader has special meaning for Pereira. He and his family, originally from India, moved to Canada from Bahrain in 1996.

“While the logistics made moving to Canada difficult, for us the choice was easy,” says Pereira. “We identify with Canada on a very personal level, and deciding to move here has been core to our identity.”

As part of the Canada 150 Community Leaders Network, Pereira will be a voice for Waterloo as Canadians reflect on the past and look toward the future. He will promote Waterloo’s Canada 150 activities and perspective across the nation-wide network, while promoting the four overarching themes of Canada’s sesquicentennial anniversary: diversity and inclusiveness; reconciliation with Indigenous communities; environmental sustainability; and youth involvement.

“Canada is a place that helps people feel welcome and at home, and it encourages individuals to be who they are,” says Pereira. “This country is definitely our home.”