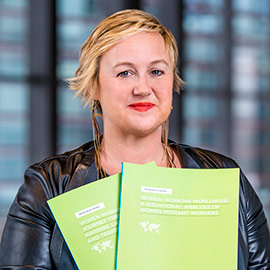 When we think about women migrant workers, often our impulse is to try to protect them. That, says Jenna Hennebry, is the wrong approach.

Hennebry is director of Laurier’s International Migration Research Centre and an internationally sought-after expert on migrant labour, gender and human rights. She has been working extensively with the United Nations on researching and advocating for women migrant workers’ rights.

For the last three years, Hennebry has been international technical lead consultant on a UN Women project called Promoting and Protecting Women Migrant Workers’ Labour and Human Rights. She is lead author of three recent reports for the UN and has been involved with the UN Committee on Migrant Workers, Convention on the Elimination of all Forms of Discrimination Against Women, Global Compact on Migration, and Global Forum on Migration and Development. She has also been working with Mexico on changes to their national migration law.

“Women are really essential workers in the global economy,” says Hennebry, who is an associate professor at the Balsillie School of International Affairs and Laurier’s Department of Communications Studies.

Women migrants are nannies, maids and personal care workers. They are also agricultural labourers, factory workers, professionals and professors. Their work helps drive economic growth in the countries they work and their remittances contribute hugely to economies in their home countries.

What women migrants need most are better opportunities and the protection of their rights, says Hennebry. Governments, however, tend to focus on protecting women and borders.

The emphasis on protecting women “infantilizes” them as “vulnerable subjects instead of rights-bearing subjects who are in situations of vulnerability,” says Hennebry.

Meanwhile, the emphasis on border enforcement puts women in situations of greater vulnerability, Hennebry says. Women may fear that complaining to authorities will result in deportation instead of access to residency and may therefore remain trapped in exploitative situations.

“We need to get back to talking about rights and protecting rights, not people.”

The Gendering of Migration

Despite the important contributions women migrant workers make, they could be doing better, says Hennebry.

Women are more likely to be in highly gendered and financially undervalued roles such as domestic work, care work or sex work. Furthermore, these jobs are often unregulated and in private spheres where workers are vulnerable to abuse. For the same reasons, women have uneven access to benefits – if any – and usually lack collective bargaining rights.

For instance, only three per cent of agricultural workers brought in through the Temporary Foreign Worker Program are women, though women comprise 30 per cent of workers in the sector overall. Roughly the opposite is true for caregiving roles. This bias arises because employers are able to choose employees on the basis of country of origin and gender, says Hennebry.

“Just because you’re a woman from the Philippines, it doesn’t make you a good care worker.”

Highly Skilled Women May Also Have Their Rights Violated

The need to focus on rights isn’t limited to low-skilled migrant workers. Though professors, researchers and graduate students may not immediately leap to mind, they too may be women who have migrated for work – and their rights may also be violated, or they may find themselves with precarious employment or migration status.

The ban has had direct impacts on temporary labour migrants – both low and high-skilled, where many “find themselves in a scenario where they can’t go to the U.S. and they’re supposed to be in the U.S. for something related to their careers or their families – or they can’t leave the U.S. for fear they may not be allowed back in,” says Hennebry.

The costs range from family fragmentation, career interruptions, loss of income to – even for these highly skilled workers – situations where such measures exacerbate unequal power relationships that women migrants may have with employers, recruiters, partners or other family members as they attempt “to hold onto whatever status they may have,” says Hennebry.

It’s time to offer women better opportunities while protecting their rights, says Hennebry. In part, she says, this can be accomplished by involving women migrants and civil society organizations in official conversations about mechanisms to hold states accountable.

“We need a broad-based shift in thinking and we’re not going to get there until we hear the voices of women migrant workers themselves.”