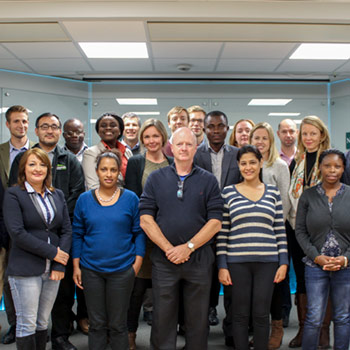 Alistair Edgar, executive director of ACUNS and associate professor in Laurier’s Department of Political Science (centre), is joined by colleagues at an ACUNS event.
Laurier-hosted international non-governmental organization dedicated to the study of the United Nations reaches 30th anniversary

The Academic Council on the United Nations System (ACUNS) has called Wilfrid Laurier University its home for half of its existence — 15 years. Now, as the international association marks its 30th anniversary in 2017 with an annual meeting in South Korea, reflections begin on the growth and success of ACUNS as it prepares for its new home at the Centre for Trust, Peace and Social Relations at Coventry University starting July 2018.

“We’re a policy-oriented association that looks at the UN system as a whole — from the sustainable development goals, peace keeping and the global refugee crisis to the role of the new secretary general and global governance at large,” says Alistair Edgar, executive director of ACUNS and associate professor in Laurier’s Department of Political Science. “We’re the network that helps people in the field — scholars of, and staff within, the UN — engage with each other.”

Founded in 1987 at Dartmouth College, ACUNS moved to Brown University in 1992, before moving to Laurier in 2003. It has become the leading membership-based organization made up of individuals and institutions that are active in the work and study of the UN system. During its unprecedented three terms at Laurier, it has largely been under Edgar’s leadership.

“I was part of the team that put in the initial proposal back in 2001 for Laurier to host ACUNS,” says Edgar. “At the time, we were mainly a small liberal arts school, but Laurier was becoming part of the development of larger activities in Waterloo committed to the study of globalization — like the Centre for International Governance Innovation and later the Balsillie School of International Affairs.”

"Having ACUNS at Laurier has been a great resource for students in Waterloo doing research on the UN and global governance."

Over the past 15 years, Edgar and his team — ACUNS Coordinator Brenda Burns and Administrative Assistant Gwenith Cross — have dramatically changed the way ACUNS reaches out to, and disseminates the work of, its members. The organization convenes workshops, lectures and seminars around the world; publishes the award-winning quarterly journal Global Governance and a popular magazine-format print newsletter; and produces the monthly E-Update with podcasts featuring three series — current issues, professional development and book talks. At Laurier, ACUNS focused on embracing online communications — newsletters and podcasts — while also revamping the design of its traditional print publications.

“When ACUNS arrived here it was relatively limited to the western hemisphere,” says Edgar. “Now, we’ve become what we’re supposed to be — we’re much more global and that’s been a major success that I think the ACUNS Board of Directors would agree with. We’ve grown our profile and membership substantially in Central and South America, India, China, Japan and Korea, where we’re hosting our annual meeting this June.”

The association’s materials now are received directly by approximately 3,500 individuals worldwide, and its work in promoting the World Humanitarian Summit reached over 40,000.

During the university’s second term hosting ACUNS, its Board of Directors asked if Laurier would be interested in competing for a third term — they liked what the university had been doing with the organization, says Edgar.

Laurier obliged and committed additional resources — a second staff member and PhD intern — allowing for increased emphasis on partnership development and the creation of a book review section that has become one of the organization’s most popular online resources.

Edgar is quick to stress, however, that the relationship between ACUNS and Laurier has not been one sided.

“Having ACUNS at Laurier has been a great resource for students in Waterloo doing research on the UN and global governance,” he says.

At any one point, there are four to eight undergraduate interns working with him and his team at ACUNS, which has been headquartered at the Balsillie School of International Affairs (BSIA). Between four to eight graduate students attend the organization’s annual meeting, giving them an opportunity to network with close to 300 scholars and practitioners working within the UN system.

“Moving outside of the United States was a big deal for ACUNS back in 2003, especially because of the general feeling that it should be an international organization,” says Edgar. “It was Laurier’s senior leadership at the time that believed in the vision to host it and who provided the resources — facilities and staff are a big commitment to make and not easy resources to find.”

ACUNS will leave Laurier and move on to its next home in 2018. Edgar will help with the transition, but will also find time to focus on his academic work — research in the area of transitional justice. The organization he helped build and improve will have moved on, and Edgar will continue to be a resource for students looking for advice and introductions to the world of multilateral global governance through Laurier’s Department of Political Science and his role with the BSIA.