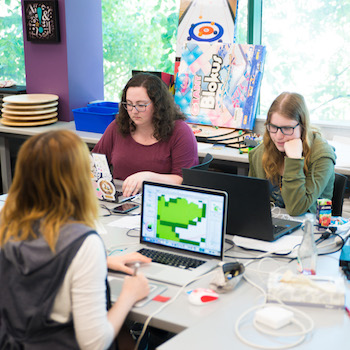 The Brantford Games Network Lab (BGNlab) on Wilfrid Laurier University’s Brantford campus looks like a cross between a well-stocked rec room and a tech startup. There are games and toys everywhere – classic and new board games, stuffed animals, Rubik’s cubes. There are also plenty of computers, tablets and hardworking young people hunched over them.

There are, however, major differences between the BGNlab and a startup – or a rec room. One is that most of the staff are students – six from Laurier, six from other colleges and universities across Ontario. Another is that the games are present for research and development purposes. The biggest difference, however, is that the young game designers, digital artists and programmers aren’t on the job to line their pockets or anyone else’s. They’re trying to change the world. 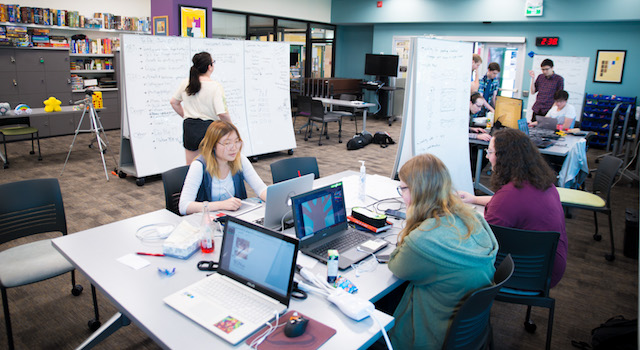 The 12 students are working under the supervision of Professor Scott Nicholson, the lab’s director and head of the Game Design and Development program on Laurier’s Brantford campus, and postdoctoral fellow Emily Flynn-Jones. They’re creating a series of games to not only teach people about climate change but actually change their behaviours.

“Games ask you to do things and if those match with things you do in real life, there’s a real possibility for change,” says Flynn-Jones.

The project, which is funded by the Government of Ontario, is truly for the world.  The BGNlab has been working with the Ministry of the Environment and Climate Change to ensure the goals of the game fall in line with actions that individuals can take to reduce their carbon footprint. When it’s done, all the ideas, prototypes and research will be released freely into the public domain for others to further develop or adapt to their needs.

“Fighting climate change is one of the most important issues of our time and requires the collective action of all Ontarians,” says Ontario Minister of the Environment and Climate Change Glen Murray. “This project encourages youth across the province to be thoughtful about their carbon footprint and help motivate low-carbon choices at school, in their community and at home.”

From Game Jam to Team

The project began in March, when BGNlab hosted a climate change game jam. Sixty students from 12 institutions worked for two days to come up with ideas for games that would encourage people to reduce their carbon emissions. About 40 of the participants applied for the 12 positions that would allow them to spend the summer turning the best ideas into real games.

The chosen students are split into three teams: game design, art and programming. Stephan Reilly, who is going into his third year in the Game Design and Development program at Laurier, is project manager, coordinating the work of the three teams.

The students are not only working on a real project with real deadlines, they’re working with a real organization – the Ministry of the Environment and Climate Change. The process so far has been fun and fruitful but also challenging at times, says Reilly.

“I don’t think any of us had worked on a project like this before. We’re learning to communicate and stay on the same page.”

From Team to Games

The goal of the summer is to produce a series of mini-games and package them into two larger games that will consist of the same mini-games presented differently.

One version will be purely recreational, with players earning points and advancing through levels. The other will be more overtly educational, with a narrative featuring a scientist from the future.

Each of the mini-games is aimed at changing a specific behaviour. For example, one involves taking leftovers from a fridge and making new dishes out of them. Another has the player turn off a variety of appliances before leaving home. Yet another teaches players to control indoor temperatures by opening and closing doors and blinds.

“The design process is driven by outcomes. We started off by asking, ‘What are the changes we want to make and how do we make games to make those changes?’” says Nicholson.

From Games to Research

The next phase of the project, starting in September, will involve extensively testing the two versions of the games in settings such as schools and libraries.

Not only will the researchers get participants’ reactions on the spot, they will also survey the players one, three, six and 12 months later to see if their behaviour has changed and stuck. 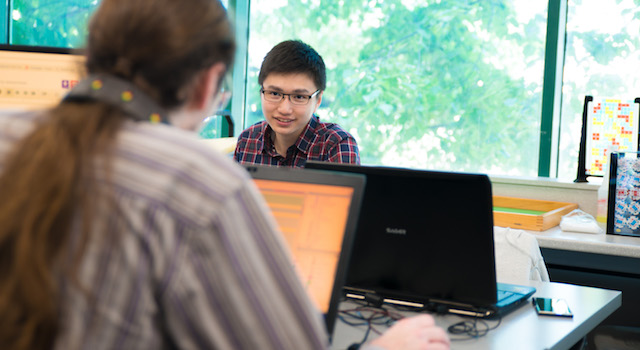 The team will determine which mini-games have the greatest impact on behaviours, as well as whether the educational or recreational version is more effective, says Nicholson.

What if the research finds people’s behaviours don’t change or don’t stick? That too will be valuable information, says Reilly. Besides, the games might still serve to raise awareness and change attitudes, he adds.

From Research to Changing the World

Can games really change people’s behaviour? Nicholson and some of the students say yes.

“I have noticed myself, just being involved in this project, I’m more aware of turning off lights when I leave rooms,” says Nicholson.

“It’s becoming second nature to me,” says Hunter Davies, a member of the art team who is going into her second year of the Game Design and Development program at Laurier. “Whenever we leave for the day, I make sure to turn off the power bar so it’s not constantly running.” 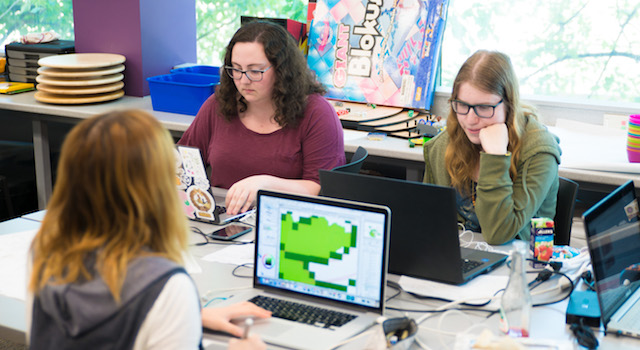 Reilly says the project has even affected his behaviour outside the games lab. “I learned that if you accelerate and decelerate your car fast, it’s worse for the environment, so now when I drive, I take off a little slower.”

Nicholson says this is how the world changes.

“If we get enough people making a small difference, it can make a big difference.”