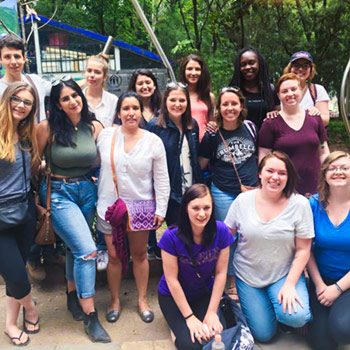 Mexico – it’s a warm, vibrant country that attracts millions of tourists worldwide. It also attracts visitors needing more than what a one-week vacation can provide. Each year, thousands of Central American migrants look to Mexico for a different kind of haven – a safe haven – as a group of students in Laurier’s Human Rights and Human Diversity program witnessed first-hand during their spring 2017 field course experience.

“Being able to speak to migrants from Honduras, Guatemala, and El Salvador about their struggles gave me a feeling that words cannot describe,” says Sharyne Williams, a third-year student in HR361: Mexico Migration and Human Rights, led by associate professor Stacey Wilson-Forsberg. “Interacting with these individuals while in Mexico gave a face to the violations that are occurring.”

Migrants, like those Williams and her classmates met, are fleeing circumstances of ethnic targeting, criminal gang violence, sexual discrimination, environmental degradation, and poverty.

Set within a human rights framework, Mexico Migration and Human Rights studies the economic and social dislocations of Mexican and Central American migrants, barriers to their migration, and the organizations and individuals who assist migrants along their journey

“Listening to the stories that these migrants are so desperate to tell is an unforgettable and heart-wrenching experience for our students,” says Wilson-Forsberg. “All of a sudden, the millions of nameless migrants they learn about in my classes have faces, names, and lives left behind. They are no longer the ‘bad hombres’ referred to in some American political discourse.”

Wilson-Forsberg, who has studied and worked in Mexico, specializes in immigration and multiculturalism.

While at the Estancia del Migrante González Martinez, a small, family-run refuge in Tequisquiapan, Querétaro, the group met a man looking for food and a place to sleep. He was walking to Mexico City, recently deported after living in the United States for 18 years. He had nothing more than the clothes he was wearing.

“Rather than just reading about what’s happening in Mexico, I’m seeing it with my own eyes,” says Williams.

Migrants riding the infamous freight train “La Bestia” (the Beast), further exemplify the page-to-reality learning experiences for students like Williams. The train, which runs north to south from the Mexican-Guatemala border to the United States and back, can be seen with hundreds of migrants riding atop old boxcars, ideally destined for a better life in the north. But that’s not guaranteed. Neither is their safety – or survival – while en route.

Williams and three others observed a passing train – a lucky occurrence as trains run irregularly to avoid being robbed. Armed officials, resembling military personnel rather than security guards, rode alongside three migrants. Williams assumed the migrants were able to bribe the security guards to allow them passage on the train.

“This moment stuck with me, for it solidified the entire experience in Mexico,” Williams says. “Discussing trains and the Beast in classes and then seeing a train go by made the whole experience come together.”

Those unable to pay the bribes are thrown from the train, subject to human traffickers, gangs or death. Wilson-Forsberg says just as many riders heading north end up returning south after being deported from the United States.

For Williams, the course also sheds new light on the Mexican people and some of the stereotypes attached to them.

“Mexico has its heart open to people in need, which is something the rest of the world could learn from them.”

A course that balances inspiration with heartbreak, Wilson-Forsberg says the silver lining of the Mexico Migration and Human Rights course is seeing the “incredible warmth of the Mexican people” through the eyes of her students.

Laurier offers a variety of domestic and international field courses with opportunities to learn while in the Northwest Territories, France, Spain, Greece, China and Uganda. Read more about learning beyond Laurier’s campuses.