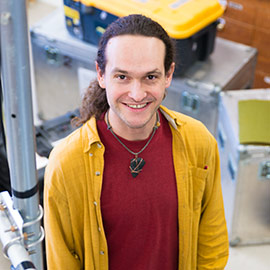 Almost every summer since he was two years old, Geoff Kershaw has been going to the mountains in the west of the Northwest Territories with his researcher parents. He’s 30 now. In that time he has seen a lot of change.

There are more trees than there used to be as the as the vegetation moves up in elevation. There are more people using all-terrain vehicles that are damaging to the fragile tundra ecosystem. But perhaps the most striking change has been to the permafrost that once kept the ground under the surface frozen and stable year-round.

Kershaw has seen hills half-disappear, sometimes resulting in ice caves where the permafrost has melted unevenly. The topsoil – with its ground cover of shrubs, mosses and lichens – has fallen off, revealing black peat that soaks up sun more efficiently, exacerbating warming. Places where he used to walk have turned into wetland – putting roads, bridges, houses and hunting trails at risk.

All this, plus his love of the land, is why Kershaw is pursuing a PhD in Geography at Laurier. Though he is just in the first year of his doctoral studies, he has recently been invited to present his research as a delegate at the Northern Research Basins Symposium and Workshop in Russia this summer.

Working with supervisor William (Bill) Quinton, director of the Cold Regions Research Centre and a founding member of the Government of the Northwest Territories-Laurier partnership for environmental research, Kershaw is working toward putting two climatic research stations on the ground at an alpine site near the Yukon border.

The solar-powered equipment has various components that can measure factors such as temperature, humidity, snow depth, solar radiation, and wind speed and direction – as frequently as every 15 minutes, year-round.

While he still has to work out the details, including coming to an agreement with the local First Nation, Kershaw hopes to go set up the equipment this summer. While the equipment is designed to run on its own, Kershaw will have to return at least once a year to check on the equipment, perhaps make tweaks or repairs, and perform on-the-ground research.

While Quinton and his team have done extensive research in northern lowlands, notably at the Scotty Creek Research Station south of Fort Simpson, Kershaw says less research has been done on alpine permafrost.

Alpine areas are more complex because of microclimates produced by factors such as the shadows of mountains, variable snow pack on slopes, and winds that are channelled through valleys. These factors can result in permafrost that is patchy or variable in thickness.

There are plenty of questions to answer, such as what happens to carbon emissions as permafrost melts. Not only does permafrost keep water locked up, it also sequesters vast reserves of carbon in frozen plant matter and dormant microbes.

“We're about to crack that vault,” says Kershaw.

Kershaw is still trying to nail down his exact research questions but says Quinton, who is the major reason Kershaw came to Laurier from Alberta, has been helping him narrow things down while giving him the freedom to explore.

“Bill suits me really well because he’s ready to help but he’s not going to force himself in for the sake of making the process more efficient or gearing it towards the ends he already has in mind,” says Kershaw.

While he is happy for the mentorship and exposure to cutting-edge research he gets at Laurier, Kershaw can’t wait to get back up north.