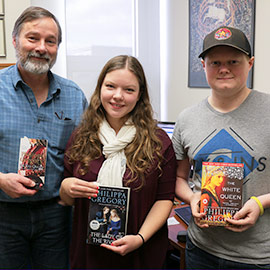 When Emily Dykeman and Scott Milne entered their fourth year as Medieval Studies majors at Laurier, they didn’t envision themselves Skyping with a New York Times best-selling author and historical fiction expert such as Philippa Gregory.

But that’s exactly what they did this fall as part of Professor Chris Nighman’s new capstone course, History and Historical Fiction: Philippa Gregory's Wars of the Roses.

To prepare for reading and critiquing Gregory’s work, Nighman’s students read samples of historical non-fiction written by other authors. Students could then examine how Gregory reconstructs the past in her novels according to available historical facts, and the varying explanations of historians

Gregory, a feminist, writes the “histories” of influential and historically significant women that are under-represented in historical documents. Nighman’s students examined how Gregory created the lives of women such as Elizabeth Woodville (wife of King Edward IV), Margaret Beaufort (mother of Henry VII), and Jaquetta of Luxembourg (mother of Elizabeth Woodville).

“Writers like Gregory invent and speculate on the lives of the women they write about, but they do it in a manner that is well-informed,” said Nighman. “She is carefully making choices in how she depicts these women according to the history that is available.”

Dykeman, Milne, and their classmates had the opportunity to discuss those choices with Gregory, and ask questions about her approach to writing historical fiction during their 55-minute question-and-answer Skype session.

Aspiring fantasy writers, Dykeman and Milne seized the opportunity to engage with an expert like Gregory.

“It was pretty amazing to hear her opinions,” said Milne. “She is definitely the real deal.”

“I can learn from her as a writer,” said Dykeman. “It’s interesting to see how she overlaps history and historical fiction.”

For Nighman, the Skype session provided his students with an opportunity to think critically about Gregory’s content, carefully analyzing how she intersects historical fact and fiction in order to represent this historical period to a contemporary audience. With the resurgence of medievalism in popular culture, there is no shortage of content for Nighman’s students to critique.

“Thor, Harry Potter, Vikings – there is something fascinating about it,” said Dykeman. “It draws you in.”