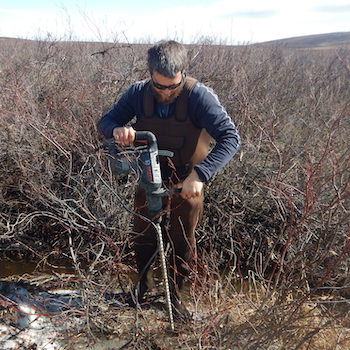 Waterloo – As the climate heats up, the Arctic tundra is becoming shrubbier. Now Wilfrid Laurier University-led research has found increases in some types of shrubs are causing permafrost to thaw faster in many places, which may release greenhouse gases to the atmosphere and affect snow and water patterns in ways not being considered in current models.

Geography doctoral student Evan Wilcox is the lead author of a paper recently published in Arctic Science, which found shrub expansion in the tundra can have varying effects on permafrost depending on factors such as shrub species, snow depth and topography. However, Wilcox and his colleagues found that overall, increased shrub growth is likely to accelerate permafrost thaw.

Previous research suggested shrubs may slow permafrost thaw. In his paper, “Tundra shrub expansion may amplify permafrost thaw by advancing snowmelt timing,” Wilcox agrees this may be true in some areas. Where shrubs provide shade in summer and do not protrude above the snow in winter, they can keep the ground cooler, helping maintain permafrost.

However, Wilcox found that where shrubs do stick up above the snow, their dark colour encourages snow melt, which results in a longer snow-free season. This, combined with higher air temperatures, results in more permafrost thaw. His paper thus provides a more nuanced explanation of the effects of shrubs on permafrost than existed previously.

The research took place at Laurier’s Trail Valley Creek Research Station, north of Inuvik, Northwest Territories, where the northern boreal forest gives way to tundra. Wilcox collected more than 3,000 frost table depths over an entire summer period – a labour-intensive process involving thrusting a steel probe into the ground to measure the thaw depth of the active layer, which is the layer of ground that thaws every summer. Below the active layer lies permafrost. If the active layer thickens, it is an indication some of the permafrost has thawed.

“Lakes and streams are changing in complex and unexpected ways,” said Marsh. “Evan’s PhD research has documented the sensitive links between climate, shrubs, snow and permafrost, and his research will allow us to test and significantly improve models for predicting changes in streams and lakes. This will provide important information for northerners to better understand the ongoing and future impacts of climate on northern water.”

Wilcox found complex factors influence permafrost thaw. Taller shrubs such as alder can trap snow, resulting in taller drifts that take longer to melt, offsetting the effects of the dark-coloured branches. However, shorter shrubs such as birch are tall enough to protrude through the snow but not tall enough to trap significant snow. Wilcox found areas covered in dwarf birch ­– the most common shrub species at Trail Valley Creek – became snow-free in the spring six days earlier on average than open tundra or alder shrub areas.

As the climate warms and shrubs become more widespread, shrub protrusion will become more common, leading to more permafrost thaw. As permafrost thaws, it will affect streams and lakes and may release large quantities of long-trapped carbon, which microbes convert to the greenhouse gases carbon dioxide and methane. Although shrubs do take up carbon, other scientists have found it won’t be nearly enough to offset permafrost thaw.

“This new potential positive feedback mechanism could mean that permafrost will thaw faster than we previously thought, which is concerning especially if you live on permafrost,” said Wilcox. “What’s more, there must be other feedback mechanisms we don’t know about if we’re still discovering some of these mechanisms now.”