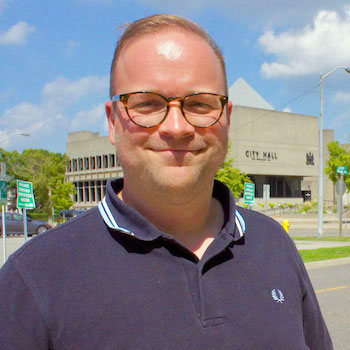 When 18-year-old Sammy Yatim brandished a knife on a Toronto streetcar one July night in 2013, the witnesses weren’t limited to the driver and passengers. Toronto Transit Commission security cameras captured Yatim’s erratic behaviour and, once police showed up, so did witnesses with cellphone cameras. The video evidence was key in the trial of Const. James Forcillo, who fatally shot Yatim, says Patrick Watson.

Watson, an assistant professor of criminology at Wilfrid Laurier University’s Brantford campus, is studying eight criminal court proceedings in Canada and the United States where a police officer was charged for fatally shooting a member of the public and video evidence was available. Three of the cases Watson is examining resulted in convictions, three in acquittals and two in hung juries.

Watson became interested in the topic in 2016, when he was teaching media studies and asked his students what was still taboo to show on television. Killing, most agreed, was taboo.

“That night, a video started to circulate of a man named Alton Sterling who was shot and killed by police in Baton Rouge, Louisiana, and it went viral really quickly,” says Watson. “Later that week, a man named Philando Castile was killed by police in Minnesota and his girlfriend live-streamed it on Facebook. So I had to go into the next class and say, ‘Actually, we do show killing a lot.’”

From Research to Practical Guidelines

Watson had previously done some research on the Yatim case, but after the Sterling and Castile killings, he was motivated to investigate more deeply. He obtained information, including the judge’s rulings, court filings and transcripts, to make sense of the role video evidence played in the case. He also secured a grant from the Social Sciences and Humanities Research Council of Canada, which will help him buy transcripts for the other cases he’s examining.

“Lots of people watch these videos and come to different conclusions about what they see,” says Watson. “We look at the ways lawyers argue in front of juries and judges about what the facts are, how video is used to establish fact and come to some sense of what happened.”

“I do expect that our findings will have some impact on the ways that lawyers in particular handle video evidence.”

In addition to academic papers, Watson aims to produce evidence-based guidelines for lawyers and agencies such as the Special Investigations Unit (SIU) and Office of the Independent Police Review Director on best practices when it comes to video evidence. He also plans to present findings to groups disproportionately affected by police violence, including Black and Indigenous communities.

“I do expect that our findings will have some impact on the ways that lawyers in particular handle video evidence,” says Watson.

Eyes on a Toronto Streetcar

Though bystander videos of the Yatim case went viral on YouTube, they are far from clear.

“I can’t see anything and I’ve looked at them hundreds of times,” says Watson. “I can’t see Yatim or I see a shadow at best and I never see who shoots. My colleague Chris Schneider of Brandon University examined the YouTube comments and they show a real polarization. The comments don’t just rely on the video. They rely on things like, ‘Yatim’s friends at school said he was a hothead’ or ‘No, his friends at school said he was really nice.’ People were using this external information to build out their response to the video.”

Surveillance footage from two of the streetcar’s cameras is clearer, though still imperfect. The SIU and Crown prosecutor relied heavily on these videos and Forcillo was charged with second-degree murder for a first series of shots, which were fatal, and attempted murder for a second series, which alone would not necessarily have been fatal. A jury acquitted Forcillo for the first series of shots but concluded the second volley was unwarranted, which is why he was ultimately convicted of attempted murder.

“The linchpin in this case wasn’t the video evidence at all,” says Watson. “It’s Forcillo’s testimony about his own perception, along with the coroner’s report. And that’s the way a lot of these cases unfold. The video doesn’t do it. The lawyers have to do the work.”

Video evidence is nonetheless important. Without it, says Watson, it can be difficult to have police officers charged in shootings. In one case he is examining, a police officer, Michael Slager, shot a man named Walter Scott after a traffic stop for a non-functioning brake light.

Initially, Slager was exonerated by the South Carolina Law Enforcement Division after telling investigators Scott had grabbed his Taser and they had struggled for it on the ground. A bystander video didn’t emerge until later because the man who filmed it feared for his safety.

“His video contradicted just about everything Slager said,” says Watson. “Without it, Slager would have been exonerated before trial. He wouldn’t have even been charged.”

“I look at myself in the mirror and I think, ‘I’m pretty lucky. I’m a middle-aged white man. I’ve never really had to experience serious hardship. Nobody looks at me and questions my abilities. So what am I going to do to make the world better?’”

While Watson says he respects police officers and appreciates the dangerous and often frightening work they do, he sees a pattern of racism in police shootings, because people of colour are disproportionately victims. That’s part of what motivates him to do his research.

“I look at myself in the mirror and I think, ‘I’m pretty lucky,” says Watson. “I’m a middle-aged white man. I’ve never really had to experience serious hardship. Nobody looks at me and questions my abilities. So what am I going to do to make the world better? I have some expertise in video analysis, some interest in law, and maybe I can do something to help explain the reasoning that went on behind these cases. And maybe that helps people recognize our mutual humanity.”

Watson hopes his students, many of whom are interested in law enforcement careers, learn something from his work.

“I hope they think, when they go into those jobs, about how to maintain a human element and respect the people they serve,” says Watson. “For students who don’t become police officers, I hope they learn the police aren’t apart from us ­– they’re part of us and accountable to us.”