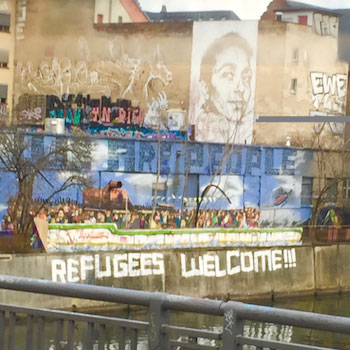 Waterloo – Anti-immigrant discourse is growing more common on the airwaves and internet, so how can communities make newcomers feel at home and help established residents welcome them? That’s the question at the heart of a conference taking place at the Balsillie School of International Affairs that will feature three free public events: an arts showcase, a documentary screening and a roundtable discussion.

Opening Communities to Newcomers: Cosmopolitanism, Solidarity Activism and Cultural Connections will take place June 5 to 7. Fostering intercultural connections through the arts will be a major theme throughout the three-day event.

“The arts can get us to think about things differently,” said Kim Rygiel, a Wilfrid Laurier University associate professor of political science and associate director of Laurier’s International Migration Research Centre (IMRC). “The arts can challenge our biases and preconceptions and move us to understand emotionally as well as cerebrally.”

The arts showcase, taking place June 5 from 7-9 p.m. at the CIGI Auditorium, will feature:

The documentary screening, taking place June 6 from 7-9 p.m. at the CIGI Auditorium, features In the Dark Times – A Culture in Exile, a film that chronicles the lives and work of refugee artists, actors, musicians and activists living in Turkey and Jordan. The film will be followed by a question-and-answer session with filmmakers Thomas Büsch and Sabine Küper-Büsch.

The public roundtable discussion, which takes place June 7 from 1:30-3 p.m., will be held in room 1-42 at the Balsillie School. Titled “Making Communities Welcoming to Newcomers: Insights from Local Organizing in the Waterloo Region,” the discussion will be moderated by Professor Alison Mountz, director of the IMRC and Canada Research Chair in Global Migration.

In addition to interested members of the general public, the organizers hope people who are involved with a wide range of organizations that serve newcomers, as well as established residents, will attend.

“Many organizations are asking the question, ‘How can we use our resources and activities to incorporate newcomers into our events?’” said Feyzi Baban, a Trent University associate professor who is co-organizing the conference with Rygiel. “That’s exactly what we’re trying to facilitate.”

The academic portion of the conference will feature presentations by community activists and scholars from around the world, including Laurier’s Bree Akesson, Patricia Goff and Ashwani Peetush. The conference aims to build on work done at a workshop held in Germany last year with some of the same participants.

“The research aims to push back against the rising xenophobia we’re seeing everywhere and create new spaces, new ways of belonging and new ways of interacting with difference,” says Rygiel. “Our international guests will also have a chance to learn about what Kitchener-Waterloo is doing as a resettlement centre.”

The conference is funded in part by a grant from the Social Science and Humanities Council of Canada. To register for the arts evening and documentary screening, visit Eventbrite. To register to attend the public roundtable discussion, email imrc@wlu.ca.