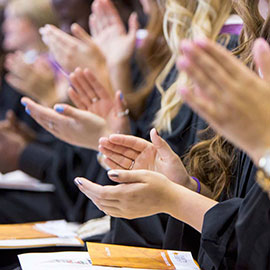 Sandra Horst (B.Mus. ’88) has been described as being "at the absolute pinnacle of international music achievement" by the general director of the Canadian Opera Company, where she is the chorus master. She is the director of Musical Studies for the Opera Division of the Faculty of Music at the University of Toronto and has been a conductor for many of the school’s productions. She also serves as a judge with the Metropolitan Opera National Council Auditions. She has served as chorus master for the Opera Theatre of Saint Louis and Edmonton Opera and has worked with Juilliard Opera Center, Chautauqua Institution Voice Program, Boston Lyric Opera, Opera Saskatchewan, and the Banff Centre for Arts and Creativity. In 2011, she was named one of Laurier’s 100 Alumni of Achievement.

Horst will receive an Honorary Doctor of Music Degree June 11 at Lazaridis Hall on Laurier’s Waterloo campus starting at 4 p.m.

For more than 30 years, Mary Lou Morgan has worked to bring nutritious, affordable food to communities across Ontario. She was one of the co-founders of The Big Carrot natural foods store, a co-operative food market in Toronto that has since grown into Canada’s largest worker-owned natural food market. Morgan has also developed and managed initiatives through FoodShare, a non-profit dedicated to bringing food to communities across Ontario. Some of those projects include the Good Food Box, which distributes fresh fruit and vegetables to thousands of families in Toronto; the Toronto Kitchen Incubator, a commercial kitchen available for small businesses to rent; and the School Food Program, a community service program for at-risk youth. She is now the manager of social entrepreneurial programs with FoodShare and a consultant and chair of the board of directors at Food Secure Canada.

Morgan will receive an Honorary Doctor of Letters Degree June 11 at Lazaridis Hall on Laurier’s Waterloo campus starting at 9:30 a.m.

Samantha Nutt is a humanitarian, physician, author and public speaker. She is the founder of War Child Canada and War Child USA and the author of Damned Nations: Greed, Guns, Armies and Aid. She is also a staff physician at the Women’s College Hospital in Toronto and an assistant professor of medicine at the University of Toronto. Her work on the front lines of some of the worst conflict zones around the world, including in Iraq, Somalia and Sudan, has benefited millions of children and their families. She is a leading authority on war, international aid and foreign policy and has appeared on CBC Radio, CBC TV and BBC World News Service and in the Globe and Mail, the Huffington Post, Maclean’s magazine and many other publications. She was recognized as one of “Canada’s Five Leading Activists” by Time Magazine and as a “Young Global Leader” by the World Economic Forum. In 2010, she was awarded the Order of Ontario, and in 2011, she was named to the Order of Canada.

Nutt will receive an Honorary Doctor of Laws Degree June 14 at Lazaridis Hall on Laurier’s Waterloo campus starting at 1 p.m.