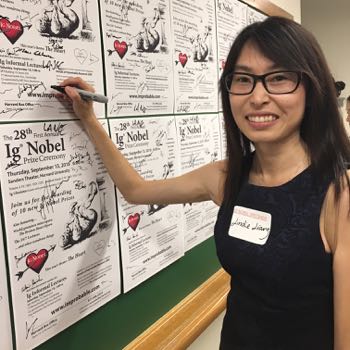 Waterloo – Wilfrid Laurier University Assistant Professor Lindie Liang and her fellow researchers have been awarded an Ig Nobel Prize for their research, which used voodoo dolls to explore how and why employees retaliate against abusive supervisors.

The prize, announced Sept. 13 at Harvard University, was presented by science humour magazine Annals of Improbable Research. The magazine awards 10 prizes annually to celebrate unusual, imaginative and funny research from around the world that “makes people laugh, and then think.” Several Nobel laureates were on hand to deliver the awards to the winners.

“We were really excited to hear we had won,” said Liang, who teaches organizational behaviour and human resource management in the Lazaridis School of Business and Economics at Laurier. “Our work manipulating the psychological state of retaliation is really novel and can pave the way for future researchers. We’re trying to understand why people retaliate against abusive bosses. We found that, with voodoo dolls, people feel they’ve restored their sense of justice.”

In their study, “Righting a wrong: Retaliation on a voodoo doll symbolizing an abusive supervisor restores justice," published in the February issue of Leadership Quarterly, Liang and fellow researchers asked participants to recall an abusive workplace interaction. Some were asked to harm an online voodoo doll using the materials provided (pins, pliers, etc.), while others weren’t given that option. Those who hurt the voodoo doll felt a greater sense of justice than those who did not. Still, Liang is hesitant to recommend that people use voodoo dolls.

“Employees retaliate because there’s mistreatment going on in the workplace. Instead of punishing people who retaliate against their bosses, the focus should be on the leader’s behaviour.”

Liang is currently studying other methods employees can use to better respond to mistreatment by their supervisors, including mindfulness training and shifting their perception of situations. She is also studying the potential of workplace gossip to prevent supervisors from abusing their employees.

Lazaridis School of Business and Economics