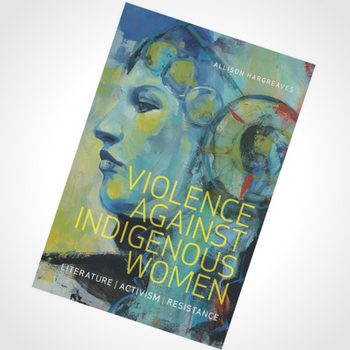 Waterloo – Wilfrid Laurier University Press author Allison Hargreaves has won the 2017 Gabrielle Roy Prize (English section) for her book, Violence Against Indigenous Women: Literature, Activism, Resistance. Hargreaves is a settler-scholar of Indigenous literatures and an associate professor in the Department of Critical Studies at the University of British Columbia, Okanagan Campus.

The Association of Canadian and Québec Literatures (ACQL) awarded the prize at a reception May 26 in Regina at their annual meeting during the Congress of the Humanities and Social Sciences.

“We are immensely proud of the accomplishment of Allison Hargreaves in Violence Against Indigenous Women,” said Lisa Quinn, director of WLU Press. “Publication of this book is a demonstration of our continuing commitment to supporting diverse and vibrant cultural inquiry in Canada. We are honoured by the recognition from the ACQL community of our role as one of Canada’s leading scholarly publishers. As the National Inquiry into Missing and Murdered Indigenous Women and Girls continues, this is necessary work.”

Hargreaves recounts the history of violence against Indigenous women and the vital role of storytelling and literature in forming a narrative of resistance against it. She places literature in dialogue with anti-violence debate to illuminate new pathways toward action, centring the voices of contemporary Indigenous women writers as a crucial response against gendered colonial violence.

The Gabrielle Roy jury affirmed the importance of Hargreaves’ contribution to Canadian literature and Indigenous women: “This is a compelling collection of timely essays and case studies on Indigenous women’s literature in Canada. Hargreaves’ introduction provides a detailed and insightful commentary on the issues surrounding the history and importance of resistance narratives. It is carefully researched, sensitively argued, memorable, and deeply insightful.”

“Our vision at the Laurier Library is for an environment that connects research, learning, and cultural engagement,” said Gohar Ashoughian, Laurier’s university librarian. “These awards underscore the importance of the WLU Press’s work across all three of these areas. It is gratifying to see the recognition and impact the work of WLU Press and author Allison Hargreaves are receiving nationally.”

The title is another successful volume in the thriving WLU Press Indigenous Studies series. Under series editor Deanna Reder (Cree-Métis), associate professor in the Department of First Nations Studies and English at Simon Fraser University, the series publishes original scholarship and develops emerging and critical conversations by and about Indigenous peoples in North America.

The Association of Canadian and Quebec Literatures annually awards two juried prizes, one in English and one in French, for the best book-length studies in Canadian and Quebec literary criticism. Established in honour of late author Gabrielle Roy, this competition is open to works of criticism on Canadian or Quebec literatures published anywhere in the world in English and French. WLU Press titles have been recognized by the Gabrielle Roy Prize 13 times.

For more information on WLU Press and a full listing of its awards, visit wlupress.wlu.ca.