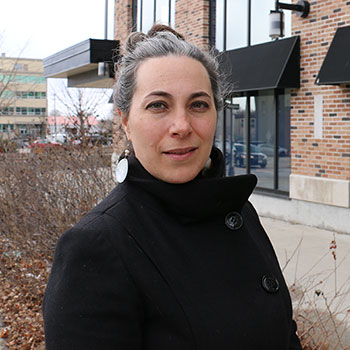 The book brings together over four years of research regarding the lived experiences of people who survived life at the Huronia Regional Centre, an institution for developmentally disabled children run by the Ontario government from 1876 to 2009, and how the structures of care in place created an environment that led to violence.

“When you situate people in spaces where dehumanization is the mechanism of care it opens the door for extreme forms of violence,” said Rossiter. “Our argument is that if an institution hits the four factors we identify in the book, then violence always ensues. It’s completely common and holds to other institutions like jails, orphanages, residential schools and crosses lines of disability. This is really a kind of organizational structure built for care that leads to inevitable intense forms of violence. I haven’t found an example where this doesn’t hold true.”

In the book, the authors categorize violence from “cold to hot.” Rossiter defines cold violence as instances where forms of care are violent, such as mass showering, limiting privacy and forcing people to live in close quarters. Warm violence is defined as violence that is meant to be punitive and justified for its use to control people’s behaviour. Examples include scrubbing floors with a toothbrush over long periods of time, encouraging resident-on-resident violence, and ice baths. Hot violence is defined as violence that isn’t attached to an end result, and takes the form of sexual abuse, physical violence for the purpose of enjoyment and sadistic violence.

The book provides a warning for future generations about the systems that dehumanize often marginalized groups of people. While many institutions such as Huronia have been closed down, Rossiter believes they are just changing form.

“We’ve shifted now to incarcerating people with disabilities at higher rates,” said Rossiter. “We’re seeing the rise of immigration detention centres and juvenile detention centres. The organizational structure is the same and replicates the same kind of violence. The difference is that society is more able to accept the maltreatment of people labelled criminal or ‘not wanted.’ The models we outline ultimately rest on the idea that the incarcerated population is less deserving of humanity than others for whatever reason.”

Rossiter received funding from the Social Sciences and Humanities Research Council for the project “Recounting Huronia: A Participatory Arts-Based Research Project,” in which she worked alongside survivors of Huronia to document their stories of torture and abuse.

Rossiter has also received nearly $300,000 in funding from the Ontario government to build a digital archive of Huronia’s history, which is currently underway.

Faculty of Human and Social Sciences