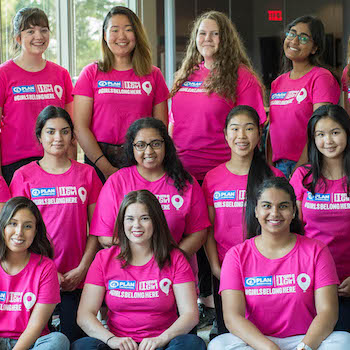 Waterloo – Wilfrid Laurier University President and Vice-Chancellor Deborah MacLatchy will welcome a teenage girl to try out the top job at the university as part of #GirlsBelongHere, a Plan International Canada initiative, to celebrate the International Day of the Girl on Oct. 11.

Seventeen-year-old Muneeza will assume MacLatchy’s role for the day, participating in meetings and learning from the president and other senior leaders what it is like to serve as an executive of a large organization.

MacLatchy is among a number of distinguished Canadian leaders, including Prime Minister Justin Trudeau, the Minister of Defence, and CEOs of prominent Canadian businesses, who will be sharing their offices for the day to help change perceptions and inspire girls’ leadership.

“I am honoured to welcome Muneeza to take over my role as Laurier president. It is incredibly important for young women to see themselves reflected in leadership positions so they can see it’s possible to realize their own potential,” said MacLatchy, who received the 2015 Recognition Award from the Senior Women Academic Administrators of Canada and was named one of Canada’s Most Powerful Women for 2012.

“My journey to become a scientist and university president does not reflect the realities faced by girls and young women worldwide living in extreme poverty and violence, facing racial and religious discrimination, and without equal access to education. I am proud to lend my voice to furthering gender equality as part of the #GirlsBelongHere initiative.”

Muneeza will join approximately 500 girls in more than 60 countries worldwide showing that #GirlsBelongHere by stepping into leadership roles and positions of power where girls and women are traditionally underrepresented. In Canada, Muneeza is part of a diverse group of girls who are stepping into the shoes of Canada’s prime minister, the minister of innovation, science and economic development, the CEO of Unilever Canada, and the host of Breakfast Television Toronto, among other roles.

Born in Saudi Arabia and raised in Ontario, Muneeza was chosen as an ambassador by her peers from Plan International Canada’s Youth Advisory Council. In her biography, Muneeza outlines her desire for peace, and what she sees as her responsibilities as a young adult living in “a world shrouded by negative stereotypes and unnecessary violence.” She describes her desire to become a general surgeon, who, in addition to helping people “in the form of medical attention and care, a basic need that every human being, regardless of any differentiating characteristics, deserves,” longs to provide comfort to female patients who require female doctors for personal or religious reasons.

Laurier, the only Canadian post-secondary institution participating in the #GirlsBelongHere initiative, has made positive steps toward furthering gender equality. The university recently increased the salaries of female associate and full professors based on an analysis of gender-based salary differentials. MacLatchy is one of the founding members of the Laurier Centre for Women in Science, which aims to build a strong community for women in science through research, communication and action.

In addition to MacLatchy, strong female leaders head the university, including chair of its Board of Governors Jillian Swartz, a business and technology lawyer, and university chancellor Eileen Mercier, a business leader, corporate director and governance expert.

“Supporting gender equality is more than just expressing your values as an institution,” said MacLatchy. “It involves proactive recruitment and retention practices that purposefully and consistently remove barriers to the success of employees. For universities, it is also about designing and offering academic programs that do the same, including in fields in which woman are underrepresented.”

International Day of the Girl Schedule

Please contact Kevin Crowley at kcrowley@wlu.ca or 519.884.0710 x3070 to arrange an interview with Muneeza or Deborah MacLatchy before Oct. 11.

Plan International works in partnership with millions of people around the world to end global poverty. Not for profit, independent and inclusive of all faiths and cultures, Plan International strives for a just world that advances children’s rights and equality for girls. Because I am a Girl is Plan International’s global movement to transform power relations so that girls everywhere can learn, lead, decide and thrive.

Plan International Canada led the global movement with the support of the Canadian Parliament and the United Nations to officially declare October 11 as International Day of the Girl, which was established in 2011. Visit plancanada.ca and becauseiamagirl.ca for more information.

MacLatchy became president and vice-chancellor of Wilfrid Laurier University on July 1, 2017 and is responsible for the overall academic and administrative operation and strategic direction of the university. A distinguished biologist with extensive experience in research, teaching and administration, MacLatchy has served as dean of Laurier’s Faculty of Science and as provost and vice-president: academic. At the University of New Brunswick, MacLatchy was dean of Science, Applied Science and Engineering, and director of the university’s International Office. She holds an honours BSc and honorary doctorate from Acadia University and a PhD in zoology from the University of Manitoba. She is a founding fellow and past chair of the science directors of the Canadian Rivers Institute, and is a past-president and council member of the Canadian Society of Zoologists.