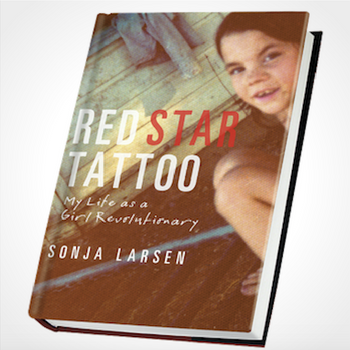 WATERLOO – Author Sonja Larsen is the winner of the 2017 Edna Staebler Award for Creative Non-Fiction for her memoir, Red Star Tattoo: My Life as a Girl Revolutionary (Random House Canada).

Red Star Tattoo is a compelling story of the writer’s unconventional and transient youth, as well as her personal experience in counterculture organizations, including her association with a clandestine wing of the Communist Party of USA.

“As is the case with lives themselves, all memoirs are unique, but this seems especially true of Sonja Larsen’s Red Star Tattoo: My Life as a Girl Revolutionary,” said Bruce Gillespie, an award juror and professor in Wilfrid Laurier University’s Digital Media and Journalism program. “In this coming-of-age story, she looks back at a childhood and adolescence spent searching for a sense of connection and purpose beyond her family, first in a commune and later as part of what she eventually recognized as a cult whose purported goal was to incite an American communist revolution. She captures the environment of paranoia, violence, and futility in which she grew up in a stark, frank style that never tugs on readers’ heartstrings or asks for their pity. Instead, Larsen presents a clear-eyed look at her almost unbelievable past and crafts a character study in resilience that is eminently engaging.”

In addition to Red Star Tattoo, the shortlist for the 2017 Edna Staebler Award included: The Shoe Boy by Duncan McCue (Nonvella) and The Elephants in My Backyard by Rajiv Surendra (Random House Canada).

Sonja Larsen will be celebrated at two public events Nov. 9 and 10 at Wilfrid Laurier University, which administers the Edna Staebler Award for Creative Non-Fiction. These events include:

About The Edna Staebler Award For Creative Non-Fiction