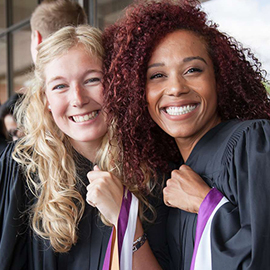 Laurier to graduate more than 1,400 students at fall convocation on Waterloo and Brantford campuses

Laurier to graduate more than 1,400 students at fall convocation on Waterloo and Brantford campuses

Waterloo – Wilfrid Laurier University will graduate more than 1,400 students at its fall convocation, to be held Oct. 27 and 28 in Waterloo and Oct. 31 in Brantford. At the Oct. 27 ceremony, Deborah MacLatchy will be installed as Wilfrid Laurier University’s seventh president and vice-chancellor since the university became a public institution in 1973. MacLatchy began her five-year term July 1, 2017.

Waterloo campus ceremonies will be held at the Lazaridis Hall Auditorium and the Brantford campus will host its fall convocation ceremony at the Sanderson Centre for the Performing Arts.

The installation of Laurier’s new president and vice-chancellor will occur at 9:30 a.m. on Oct. 27. A distinguished biologist with extensive experience in research, teaching and administration, MacLatchy served as dean of Laurier’s Faculty of Science from 2007 to 2009 and as provost and vice-president: academic from 2009 to 2017. MacLatchy holds an honours BSc from Acadia University and a PhD in zoology from the University of Manitoba. She is a founding fellow and past chair of the science directors of the Canadian Rivers Institute, and is past-president and council member of the Canadian Society of Zoologists. She has received a number of significant awards, including an honorary doctorate from Acadia University in 2016 and the 2015 Recognition Award from the Senior Women Academic Administrators of Canada. She was also named one of Canada’s Most Powerful Women for 2012 in a Top 100 list compiled by the Women’s Executive Network.

Regehr will be awarded her honorary degree at 4:30 p.m. on Oct. 27. After graduating from Laurier in psychology, she completed a master’s degree in social work and spent 20 years in clinical social work, where she developed initiatives to provide emergency mental health services for victims of sexual violence, survivors of disasters, and emergency service professionals. She went on to a PhD and an academic career and has made outstanding contributions to some of today’s most significant social and mental health challenges as an impassioned academic leader, community builder, social worker, educator, and researcher.

Brooks will be awarded her honorary degree at 1 p.m. on Oct. 28. She became the first female president of the Hudson’s Bay Company in 2008 and is credited with leading a turnaround for the company. Before that, she spent her career building high-end retail companies around the world and had served as editor-in-chief of Flare magazine. She holds an MBA from Western University. Brooks retired from Hudson’s Bay in 2016 and serves as a board member for a number of other prominent companies. Throughout her 40-year career, she has served as a role model for women in leadership and philanthropy.

All convocation ceremonies are ticketed events. For those unable to attend, live streams of the ceremonies will be available.