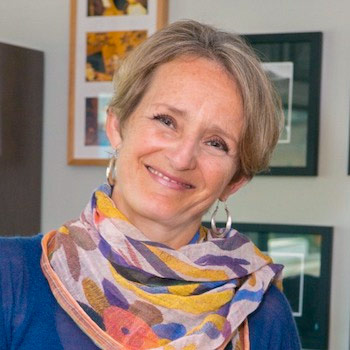 Waterloo – The land that is Canada will be celebrated through music, storytelling, video and art at a new production that will make its début at the Registry Theatre in Kitchener on May 31, 2017.

The production, entitled This Land, is the brainchild of Wilfrid Laurier University Associate Professor Kimberly Barber, an internationally renowned mezzo-soprano and coordinator of the opera program at Laurier’s Faculty of Music.

This Land is a multidisciplinary arts production conceived for Canada’s sesquicentennial. It brings together diverse poets’ voices – settler, Indigenous, rural, urban – and sets them to music to celebrate the land.

Barber, who is also incoming associate dean (external) for the Faculty of Music, will be singing six songs, all of which are Canadian poems set to music in newly commissioned work by composer Abigail Richardson-Schulte. She will be appearing with the TorQ Percussion Quartet and harpist Angela Schwartzkopf in an unusual combination of voice, harp and percussion.

Of importance to Barber is that neither she nor the other musicians will appear first in the production. That honour will belong to Anishinaabe (Ojibwe) elder, storyteller and narrator Rene Meshake, who will be appearing via video and representing the Indigenous first voice of the land.

Since Waterloo Region is in Anishinaabe traditional territory, Barber turned to Meshake, a multi-talented artist and residential school survivor, to bring in the foundation of an Anishinaabe creation story. Meshake suggested that he write his own creation story in the Anishinaabe language and narrate it from within the landscape rather than on stage.

Waterloo filmmaker Lyndon Horsfall produced the video of Meshake’s outdoor recitation, which will begin and be interwoven with other elements of the production. NUMUS, Kitchener-Waterloo’s new music society, added the show to its lineup. Art by local artist Isabella Stefanescu will be projected onto a screen. The Ontario Arts Council contributed funding to commission composer Richardson-Schulte.

The six poets whose work is set to music range from Bliss Carman, who was born before Canada’s confederation, to a number of living poets, including Marianne Bindig, who is a Laurier voice instructor as well as poet.

The other featured writers are Robert Priest, a Toronto poet, author and singer-songwriter; Gregory Scofield, a Métis/Cree poet and assistant professor at Laurentian University; Phoebe Tsang, a violinist and poet who lived in Hong Kong and England before immigrating to Canada, and Jan Zwicky, a philosopher and poet with prairie roots.

Barber is thrilled This Land has already brought so many people and disciplines together. She hopes to grow the production to encompass dance and more visual art. She would like to tour with it, bringing it to First Nations and settler audiences across the country, though she is still seeking the funding to do so.

“This is a reconciliation piece,” she said.

Barber sees the production as the culmination of considerable research into Canada’s history, identity, art and physical environment. She says research can be expressed as artistic creation as well as through more conventional vehicles such as academic papers.

“As performing artists, our research is actually the creation of the work,” she said. “We’re disseminating our research in performance. It’s our responsibility to be reflecting the spirit of the times and also to initiate potentially uncomfortable conversations.”

Tickets for This Land are available through NUMUS.