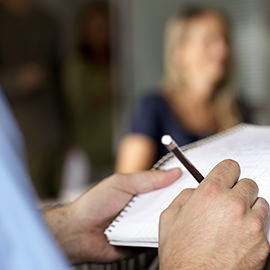 The data – which will be available on OCUL’s Scholars Portal Dataverse and <odesi> platforms – come from a range of opinion polls and surveys on topics such as national and provincial politics, real estate buying habits, and Canadian heritage, among others. Together they represent a goldmine for researchers looking for insights into the opinion of Canadians during key periods in the country’s recent history.

Ipsos has been generously donating data to Laurier for several years. The company made its first gift of data to the university – evaluated as a Gift of Cultural Property under the provisions of the Cultural Property Export and Import Act – in July 2008. Since that time the university has received several additional donations from Ipsos, now collectively referred to as the Ipsos Canadian Public Affairs Data Collection, which resides in, and is overseen by, the Laurier Archives.

“We live in a world shaped by big data, and libraries and archives are responding dynamically to that reality,” said Gohar Ashoughian, Laurier’s university librarian and archivist. “This is a wonderful example of libraries’ role as shepherds and caretakers of historically significant data, and I’m very proud of the work at Laurier and OCUL to make the Ipsos data universally available.”

The Laurier Institute for the Study of Public Opinion and Policy (LISPOP) has been closely involved in the donations of the Ipsos data since the beginning of the relationship, and remains a key user of the materials. LISPOP director Andrea Perrella, for instance, uses the data in his own research, focusing on a series of election-day surveys that document Canadians’ evolving voting preferences, social attitudes, and other opinions.

“Data itself has an intrinsic value, but it’s the work and effort of the analyst and researcher to interpret it that makes it truly useful to our understanding of the world,” Perrella said. “There’s so much to be gained from making it widely available, and more and more leading institutions are doing just that.”

Perrella has been able to use the Ipsos data to study the opinions of very specific segments of the Canadian voting public – such as LGBT voters and supporters of the environmental movement – whose values and choices would otherwise be difficult to track. The data also allow researchers to study changes over time in the opinions of broad swaths of the electorate on issues such as capital punishment, and to compare the opinions of male and female voters on particular questions, for example.

Perrella credits Stephen Brown, former director of LISPOP, for his instrumental role in bringing the Ipsos data to Laurier, and for his continued work with the materials as a consultant.

OCUL executive director John Barnett expressed his organization’s pleasure at being a partner on the project, and highlighted the increasing importance of online research data in the digital era.

“This is important for Canada, and helps promote interest in Canada outside the country,” he said. “It’s very exciting to be able to partner with one of our members and with Ipsos to make this material available.”

“Part of what we do is to ensure that the data will be protected and accessible not only for researchers today but also for researchers in the future,” said Alan Darnell, director of Scholars Portal Services at OCUL. “Given the speed at which technologies and file formats evolve, that’s a really important task.”

Laurier is a leading comprehensive university known for academic excellence and a culture that inspires lives of leadership and purpose. Laurier has a deep commitment to both teaching and research, combined with a strong student focus and distinct sense of community. We value global engagement and challenge people to become engaged and aware citizens of an increasingly complex world. With roots stretching back to 1911, Laurier has more than 19,000 students at campuses in Waterloo and Brantford, and locations in Kitchener and Toronto, and an office on Chongqing, China.

About the Ontario Council of University Libraries (OCUL)

OCUL is a consortium of Ontario’s 21 university libraries. Its strength lies in its commitment to work together to maximize collective expertise and resources. OCUL has been collaborating since 1967 to enhance information services in Ontario and beyond through collective purchasing and shared digital information infrastructure, collaborative planning, advocacy, assessment, research, partnerships, communications, and professional development. Scholars Portal is a service of OCUL provided to libraries in Ontario under a service agreement with the University of Toronto Libraries, where Scholars Portal is located. Scholars Portal services include the Scholars Portal Dataverse and <odesi> platforms.