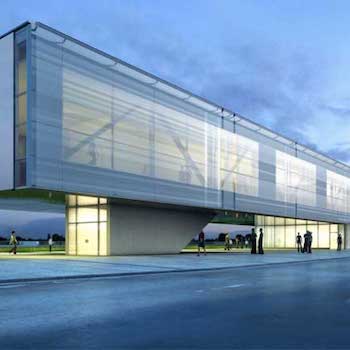 Brantford, ON – Longtime Brantford residents Steven and Helen Kun announced today that they are doubling their commitment to the Laurier Brantford YMCA with an additional $1-million gift. This donation brings the family’s total contribution to the project to $2 million.

The YMCA and the university, along with numerous community representatives, recognized the Kuns’ generous contribution today in a special celebration that also marked the completion of the Laurier Brantford YMCA fundraising campaign. The campaign has raised a total of $5.4 million for the new facility, surpassing the original goal of $5 million.

Support for the project has come from federal, provincial and municipal government partners as well as local individuals and corporate donors who recognize the impact that the Laurier Brantford YMCA will have on the health and well-being of the community.

“The broad support we’ve received from local residents, business and our government partners highlights our shared commitment to improving the health and wellness of people in Brantford and our surrounding communities. Donors to the Laurier Brantford YMCA have been instrumental in bringing our vision for a healthier Brantford to life and we are grateful for their continued support.” said Jim Commerford, president and CEO, YMCA of Hamilton|Burlington|Brantford.

The Kuns were early supporters of the project, making their first $1-million donation in 2014. They view the Laurier Brantford YMCA as an important part of the continued revitalization of downtown Brantford. To recognize the family’s support, Laurier and the YMCA will be naming the main lobby, which joins the two entrances and covers two floors, the Kun Family Atrium.

The new centre is a joint venture between Wilfrid Laurier University and the YMCA of Hamilton|Burlington|Brantford. The shared planning, fundraising and operation structure employed by the two organizations is unique in North America and represents a partnership model for other communities.

“We are very grateful to the Kuns and all of the generous donors who have supported the Laurier Brantford YMCA,” said Max Blouw, president and vice-chancellor of Laurier. “This complex will have a dramatic impact on the community and on Laurier students. It will increase our ability to attract more students to Brantford and further contribute to the city. Laurier is very proud to be part of this thriving community.”

The Laurier Brantford YMCA will serve students from Laurier and Conestoga College along with residents from Brantford and surrounding communities. The facility will provide both health and wellness programs, as well as organized sports and athletics. Construction of the approximately 120,000-square-foot multi-storey centre is actively underway, with opening slated for late summer 2018. The Laurier Brantford YMCA will feature an aquatic centre, large gymnasium, fitness and conditioning spaces, multipurpose studios, and lounge areas.