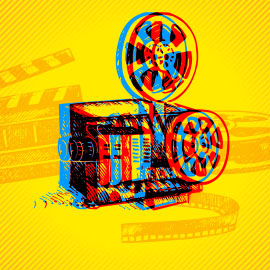 WATERLOO – The Laurier Free Film Series presents, “Tracking Shots #3: Aboriginal Cinema.” The six-part series features an eclectic mix of documentaries, short films, and feature-length films in addition to presentations by guest filmmakers and speakers. Screenings will be held in Room 102 of the Bricker Academic building on Wilfrid Laurier University’s Waterloo campus on select Thursdays, beginning Jan. 12 at 7 p.m. The series is free and open to everyone in the community.

“Tracking Shots #3” is a follow-up to the very successful “Tracking Shots” series screened last winter. The series is presented by Laurier’s Department of English and Film Studies, in partnership with the Office of Aboriginal Initiatives at Laurier.

"Laurier's Office of Aboriginal Initiatives seeks not only to create an inclusive, welcoming environment for Aboriginal students, but it also seeks to provide all Laurier students with opportunities to enhance their understanding of Canada by providing Aboriginal education,” said Jean Becker, senior advisor: Office of Aboriginal Initiatives. “This film series furthers this education by reflecting the place of Indigenous peoples in the history and landscape of our country.”

Indigenous literature scholar Jenny Kerber introduces this feature-length documentary about a Blackfoot Aboriginal and a Chinese-Canadian newcomer who discover their shared heritage as they embark on a spiritual journey across traditional Blackfoot territory. Through thousands of years of ancient history guided by the wisdom of modern-day elders, they find the beginnings of the long road to reconciliation between Indigenous and non-Indigenous people.

A couple of quirky down-and-out men, played by two of Canada’s best actors (Stephen Ouimette and Gary Farmer), wander the wintry streets of Winnipeg for a day and a night trying to sell a space heater and survive the cold. Ken Eisner’s review in Variety notes that the film’s “mordant humor brings a Beckett-like edge to the prairie neo-realism.”

This powerful, award-winning documentary chronicles the struggles of Caleb Behn, a young Aboriginal leader and lawyer-in-making who fights to protect First Nations territory from some of the world’s largest fracking operations. Confronting fractures within his community and himself, Behn struggles to reconcile traditional teachings with the law in order to protect the land.

This feature documentary by acclaimed filmmaker Alanis Obomsawin (Kanehsatake: 270 Years of Resistance) profiles Indigenous leaders in their quest for justice as they seek to establish dialogue with the Canadian government. By tracing the history of their ancestors since the signing of Treaty No. 9, these leaders aim to raise awareness about issues vital to First Nations in Canada: respect for and protection of their lands and their natural resources, and the right to hunt and fish so that their societies can prosper. In recent years, an awareness-raising movement has been surfacing in First Nations communities. In this powerful documentary, those who refuse to surrender are given a chance to speak out.

7 Minutes is a re-enactment of one woman’s seven-minute walk home from her university library on a night when a man followed her and tried to get her into his van. Sex Spirit Strength follows Michael and Jack, two young Indigenous men, as they shed the stigma and shame associated with their sexual health and gender identity. Hollow Water profiles a tiny Ojibway community on the shores of Lake Winnipeg as they deal with an epidemic of sexual abuse in their midst.

Introduced by the film’s director, The Pass System illuminates Canada’s hidden history of racial segregation. For over 60 years, the Canadian government often denied Indigenous peoples the basic freedom to leave their reserves without a pass. Cree, Saulteaux, Dene, Ojibwe and Blackfoot elders of the prairie land where this took place tell their stories of living under and resisting the system, and link their experiences to today. Narrative by acclaimed Cree actor and activist Tantoo Cardinal (Dances with Wolves, Legends of the Fall).

Wilfrid Laurier University acknowledges that it is on the traditional territory of the Neutral, Anishnawbe and Haudenosaunee peoples.