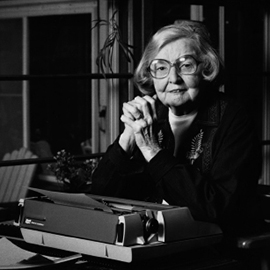 Designed to encourage new Canadian talent, this national award is open to authors who have published a first or second book with a Canadian locale and/or significance. The 2017 award is open to works published in the 2016 calendar year and distinguished by first-hand research, well-crafted interpretive writing and a creative use of language or approach to the subject matter.

Entries must be received by April 1, 2017 to be considered. To obtain an entry form and a complete list of submission guidelines, please visit the Edna Staebler Award website.

The shortlist and winner will be announced in the summer. The author will be presented with the award and make appearances in Waterloo and Brantford in the fall.

Journalist and author Ann Walmsley was the recipient of the 2016 Edna Staebler Award for Creative Non-Fiction for The Prison Book Club (Viking).

Established and endowed by writer and award-winning journalist Edna Staebler, the Edna Staebler Award for Creative Non-Fiction is administered by Wilfrid Laurier University, the only university in Canada to bestow a nationally recognized literary award. The $10,000 award encourages and recognizes Canadian writers for a first or second work of creative non-fiction that includes a Canadian locale and/or significance. The award was established in 1991 and celebrated its 25th anniversary in fall 2016.