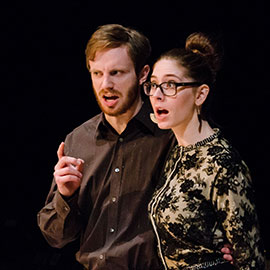 Spotlight returns to Opera Laurier with The Tales of Hoffmann

Spotlight returns to Opera Laurier with The Tales of Hoffmann

Waterloo – After celebrating Wilfrid Laurier University Faculty of Music’s 40th anniversary last year, Opera Laurier will perform the legendary Tales of Hoffmann by French composer Jacques Offenbach. The performance will be directed by Anna Theodosakis and conducted by Opera Laurier’s resident conductor Leslie De’Ath. Performances will take place March 3 and 4 at 8 p.m. and March 5 at 3 p.m in the Theatre Auditorium on Laurier’s Waterloo campus.

No other opera has stood the test of time quite like Offenbach’s The Tales of Hoffmann. Based on the short stories of German poet E. T. A. Hoffmann, the opera is a thrilling account of the themes, personalities, and adventures integral to 19th century Romanticism. But what makes the opera stand out most is the level of fun it contains, with many memorable musical moments, a grand chorus, and spunky characters everyone can relate to.

Hoffmann transforms from the writer to the hero of his own stories in Jules Barbier’s libretto. “The real Hoffmann, like his fictionalized counterpart, struggled through three doomed relationships involving disapproving fathers and tragic loss. He was also an alcoholic with self-destructive tendencies,” says Theodosakis. “Just like Hoffmann’s stories, the opera plays with our perception of what stems from truth and what is simply fiction. This manipulation sparks the question whether or not Hoffmann based his fantastical tales on events in his own life.”

Opera Laurier, made up of Laurier voice performance students enrolled in The Practice of Opera course, stages two productions a year—an evening of operatic scenes around a unifying theme in the fall term and a full production with orchestra in the winter term. Students gain hands-on experience by learning and practicing stagecraft, stage makeup and costuming, as well as all aspects of production from the physical set to stage management, publicity and marketing. Practitioners with broad professional experience work with the students as stage directors and facilitators. Tickets to The Tales of Hoffmann are free for Laurier students and high school students, $20 general admission and $10 for seniors, non-Laurier university students and college students. Tickets can be purchased at the door before each performance, or in advance by emailing concerts@wlu.ca or calling 519-884-1970, ext. 2432. Tickets are offered online through ticketscene.ca.

Members of the media are welcome to attend Opera Laurier’s rehearsals of The Tales of Hoffmann, which take place the week of Feb. 20. Please email concerts@wlu.ca for details.

Since 1975, Laurier’s Faculty of Music has grown from 69 students in one undergraduate program to over 400 students across seven degree and diploma programs at the undergraduate and graduate levels. Laurier also operates the Laurier Conservatory with over 1,000 students, is home to the National Youth Orchestra of Canada and has been named Canada’s Best Music Campus by CBC Radio.