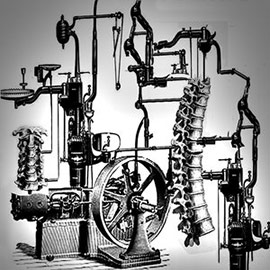 Laurier biopolitics conference to focus on the politics of life

Laurier biopolitics conference to focus on the politics of life

Waterloo – Biopolitics is an interdisciplinary field of research that examines how life has become a central political issue in our era. Researches examine such topics as the relationship between politics and genomic sciences, biotechnology, colonialism, human reproduction, pandemics, international migration, and borders. Now some of the foremost biopolitical thinkers from around the world will be gathering for a three-day conference at the Balsillie School of International Affairs.

The conference, which runs from Thursday, March 2 to Saturday, March 4, is titled “The Politics of Life: Rethinking Resistance in the Biopolitical Economy.” It is the first event to be organized by the recently formed Technē: Wilfrid Laurier University Biopolitical Research Group, in association with Laurier, the Balsillie School, and the International Migration Research Centre.

“Most of the literature on biopolitics is quite negative,” said Greg Bird, an assistant professor of sociology at Laurier and coordinator of Technē. “At our event people will present alternative ways to conceive of political resistance in our era. We want people to think of types of resistance that will directly challenge the ways that life is managed, controlled, and transformed today.”

Kim TallBear, a Canada Research Chair and associate professor at the University of Alberta’s Faculty of Native Studies, will deliver the keynote lecture from 7 p.m. to 9 p.m. on March 2. In her talk, titled “DNA and the Racial Re-Articulation of Indigeneity,” TallBear will argue that in defining Indigeneity, scientists prioritize genetic ancestry while Indigenous people emphasize political status along with biological and cultural kinship. This difference, she says, may undermine First Nations self-determination and the global Indigenous anti-colonial movement.

Aside from the keynote, the first two days will focus on presentations by an international group of scholars, while the third day will be a graduate student conference. All sessions are free and open to the public.

The Laurier faculty who will be presenting March 2 and March 3 include Associate Professor Penelope Ironstone, who will discuss the politics of the human microbiome, Assistant Professor Charles Wells, who will present Guantánamo Bay detainees as people kept alive to suffer, and Associate Professor Jenna Hennebry, who will speak about the racialization and securitization of migrant workers.

Full program details, as well as free registration information for the keynote lecture, can be found at technebiopoliticalrg.com/politicsoflife.