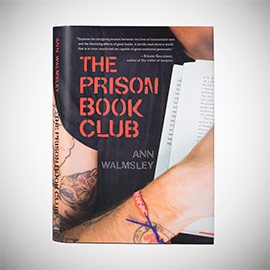 WATERLOO – Ann Walmsley is the winner of the 2016 Edna Staebler Award for Creative Non-Fiction for The Prison Book Club (Viking).

The Prison Book Club is a record of book club discussions, presented in a straightforward and engaging manner that draws the reader into the conversations and lives of the book club members, and, briefly, into Walmsley’s own journey to overcoming her initial fear of working with prison inmates. She concludes with short descriptions of the lives of a handful of book club members beyond their prison terms, leaving no doubt as to the profound impact that prison book clubs can have on those given the opportunity to take part in them.

“Walmsley’s book provides a unique glimpse into the lives of incarcerated men and the transformative power of literature and fellowship,” said Bruce Gillespie, an award juror and professor in Digital Media and Journalism at Laurier’s Brantford campus. “Walmsley immerses readers in the inmates’ thoughtful, far-ranging discussions about the worlds outside the prison gates that are revealed to them through the books they read.”

In addition to The Prison Book Club, the shortlist for the 2016 Edna Staebler Award included: That Lonely Section of Hell by Lorimer Shenher (Greystone) and The Right to be Cold by Sheila Watt-Cloutier (Allen Lane).

This year marks the 25th anniversary of the Edna Staebler Award for Creative Non-Fiction. A number of special events are planned to celebrate the anniversary. These include: