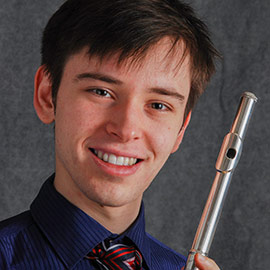 Laurier competition winner to perform with the Kitchener-Waterloo Symphony

Laurier competition winner to perform with the Kitchener-Waterloo Symphony

WATERLOO – Mason Pomeroy, a fourth-year Laurier Faculty of Music student, will perform Frank Martin’s Ballade for Flute and Orchestra with the Kitchener-Waterloo Symphony (KWS) on March 10.

Pomeroy was given the opportunity to perform with the KWS as the winner of the 2015 Ken Murray Concerto Competition Award of Distinction. Since 2002, Ken and Marilyn Murray have presented the award, which is among the university’s most prestigious, along with a $5,000 scholarship and the chance to perform with the KWS to a Laurier Faculty of Music student.

“I am very honoured to have received this prestigious award,” said Pomeroy. “I was surprised to hear that I won the competition, but gratified that my hard work was rewarded.”

Music is an integral part of Pomeroy’s life. At a young age, Pomeroy started taking piano lessons and his interest for music continued into high school. At the age of 13, his high school music teacher provided him with an opportunity to work with a variety of instruments. He chose the flute and has been playing it ever since. Pomeroy has been studying the flute with professor Amy Hamilton since starting music at Laurier four years ago. After graduation, Pomeroy plans to pursue a graduate degree and has already applied to several graduate schools, hoping to eventually perform as a professional orchestral musician.

Tickets for the March 10 performance are $45 for adults and $10 for students and are available at the Conrad Centre Box Office or online at www.kwsymphony.ca. All proceeds will benefit the KWS Volunteer Committee.

Laurier’s Faculty of Music is celebrating its 40th anniversary and its growth from 69 students in one program to over 400 students across seven degree and diploma programs at the undergraduate and graduate levels.

Laurier also operates the Laurier Conservatory, is home to the National Youth Orchestra of Canada and was named Canada’s Best Music campus by CBC Radio.