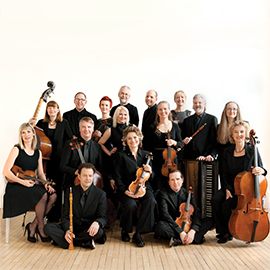 Note: Due to poor weather conditions our Tafelmusik concert scheduled for Monday, Feb. 2 is postponed to Thursday, Feb. 5 at 8 p.m. in the Maureen Forrester Recital Hall. Tickets that were purchased for the Feb. 2 concert will be accepted for Thursday's concert.

If you are unable to make the Thursday show we will refund you with proof of ticket. To purchase tickets or to inquire about a refund, visit Kathy Gauci in the John Aird Centre, room A504, call 519-884-1970 x4439, or email concerts@wlu.ca.

Founded in 1979, Tafelmusik has long been renowned in North America and internationally for its distinct, exhilarating and soulful performances. Under the leadership of Jeanne Lamon, chief artistic advisor and former Laurier instructor, the orchestra excels in music from the baroque and classical eras and beyond, including adventurous cross-cultural reinventions of baroque classics from the late 17th and early 18th centuries.

“There is considerable local interest in baroque music, and many of our students and community members have heard Tafelmusik in Toronto or elsewhere, so I’m very pleased they were able to include us in their touring schedule,” said Glen Carruthers, dean of Laurier’s Faculty of Music. “Their program is outstanding, too. Catherine Manson has included two Bach concertos in addition to the outstanding orchestra repertoire.”